Pain relief that doesn’t come with unpleasant side effects may be just a touch away.

Whether you’ve got a headache, muscle soreness, or back pain, you’re going to want to reach for the right over-the counter pain reliever.

The problem, however, is that pain relief that comes from a bottle can carry side effects—even dangerous ones.

For a natural, side effect-free option, reach no further than the palm of your partner’s hand, according to a new study led by Pavel Goldstein, a postdoctoral pain researcher in the Cognitive and Affective Neuroscience Lab at the University of Colorado Boulder.

Touch has long been known to have important value, according to the study authors.

Specifically, skin-to-skin touch has been shown to help premature infants by regulating their stress, providing comfort and enhancing their development.

Scientists also know that couples subconsciously sync their actions (matching their footsteps when walking together, for example), and that just by being in one another’s’ presence, their heart rates and breathing rhythms sync up.

The new study, however, which was co-authored by University of Haifa Professor Simone Shamay-Tsoory and Assistant Professor Irit Weissman-Fogel, is the first to explore interpersonal synchronization in the context of pain and touch, say the researchers in a press release issued by the University of Colorado. 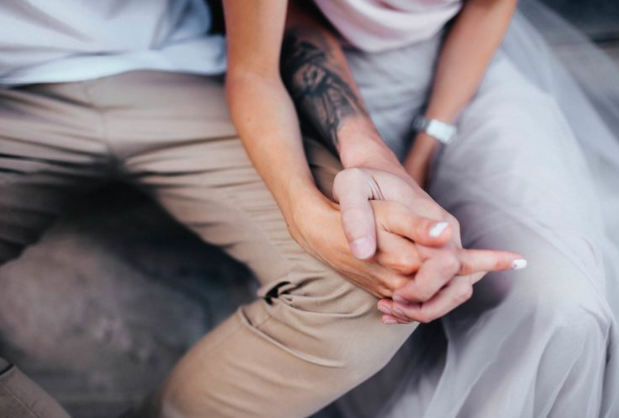 For the study, which was published in Scientific Reports, Goldstein recruited 22 long-term heterosexual couples, age 23 to 32, and measured their heart and breathing rates as the women were subjected to mild pain (in the form of mild heat) for two-minute sequences, while the couples were told to either hold hands or not hold hands.

For comparison’s sake, the couples were also separated while the women were subjected to the pain stimulus. Sitting in the same room, the couples’ heart and breathing rates tended to synced up, but pain broke the link.

However, when the couple was allowed to hold hands, not only did their heart and breathing rates sync up, the woman’s sensation of pain decreased.

Goldstein theorizes that the synced heart and respiratory rates can create a calming, analgesic (pain-reliever) affect. (These anti-inflammatory foods may also help to reduce pain naturally.)

“It appears that pain totally interrupts this interpersonal synchronization between couples,” explained Goldstein. “Touch brings it back.” The authors hope their results will inform the discussion as science seeks alternatives to opiate-based pain relief in the form of natural pain relievers.