Can Anxiety and Depression Be Contagious? We Asked the Experts Skip to content

The truth about whether you can “catch” a mental illness the way you catch a cold.

Can you “catch” a mental illness like anxiety and depression the same way you catch a cold? It’s something many people believe to be true, according to a recent study published in the journal Memory & Cognition. In the study, participants reported thinking that after a social interaction with someone who lives with anxiety disorder, alcohol abuse, anorexia, and even schizophrenia, the condition could “rub off” on you.

The answer, according to experts, is no—mental illness is not contagious. But then things get a little more nuanced. It is true that we can pick up the emotions and habits of people we spend time with. So if your best friend is suffering from anxiety disorder and functions in a constant state of stress and worry, you could start feeling similar emotions. If a family member is in the throes of depression, you might notice mood changes in yourself after visiting them. 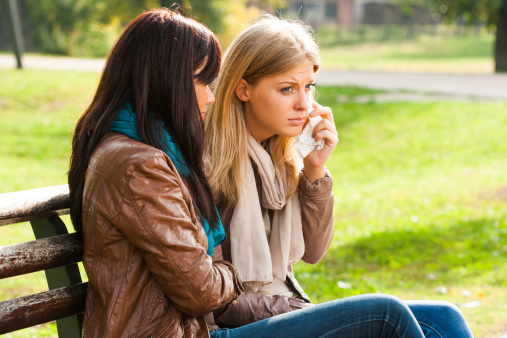 “Emotions are contagious because we are social beings that respond to our environment,” says Judy Ho, PhD, a clinical and forensic psychologist based in Southern California. “Emotional contagion is feeling or expressing a similar emotion to those around you because their feelings cue you to believe you should have those same emotional reactions. We watch others for how to respond, and emotional contagion is an extreme form of that.”

But feeling similar anxious emotions to those that your friend displays doesn’t mean you have the same anxiety disorder they have. That’s because mental illnesses can’t be transmitted from one person to another like the flu. “Psychiatric and psychological dysfunction is not caused by an infective agent, and therefore one cannot ‘catch’ it from an ill person,” explains Gail Saltz, MD, an associate professor of psychiatry at the New York-Presbyterian/Weill­ Cornell School of Medicine.

So if you’re worried about developing a mental illness, you would be better off looking into your family history than stressing about who you spend time with. “The idea that social interactions can increase the risk of being diagnosed with mental illness probably stems from the fact that emotions can easily spread from person to person,” says Ho. “But emotions are transient and do not represent significant mental illnesses that require treatment.”

Not sure if something serious is going on with you—or if someone else is influencing your mental health? Talking to a therapist can help you get to the root of any mental health issues you are, or you suspect you might be, dealing with.

And if you know for sure that someone else’s mental illness is influencing your emotional state, don’t just cut them out of your life to fix things. “When people avoid being with someone who has depression or anxiety because they fear catching it, it’s really unfortunate because it further isolates the patient who is actually struggling and needs support—support which will not harm the person giving it,” says Dr. Saltz.

Instead, check in with your doctor about your own mental health, then give the other person a shoulder to lean on. People living with mental illnesses suffer from enough stigma as it is; showing empathy and being there for them isn’t going to mess with your head.